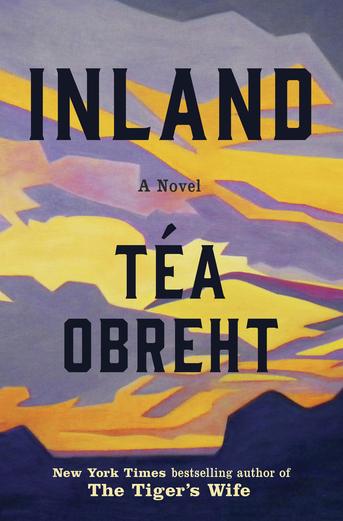 ​"It’s the west, but not as we know it. Nora and Lurie are set on a collision course: will they meet? Obreht’s narrative skill here is part of the magic of Inland, which succeeds spectacularly at reinventing a well-worn genre and its tropes. There are no stereotypes in this western, only ferociously adroit writing that honours the true strangeness of reality in its search for the meaning of home."

"Obreht leads with an invisible hand. We hardly realize that she is piecing the story together until it emerges, at the end, as a kind of gestalt. If there are narrative gaps—and there are—the reader has worked to fill them. And what might have appeared as a sideshow—an epic battle between rival small-town newspapers; or the consequences of Lurie’s arbitrary theft—finds its place, in an ecstatic unification of more than just the novel’s central characters: of time itself.

“It’s a voyage of hilarious and harrowing adventures…[N]ot just a literary effect of Obreht’s gorgeous prose; it’s an uncanny representation of the indeterminate nature of life in this place of brutal geography.”

"What Obreht pulls off here is pure poetry. It doesn't feel written so much as extracted from the mind in its purest, clearest, truest form."

“Obreht’s simple but rich prose captures and luxuriates in the West’s beauty and sudden menace. Remarkable in a novel with such a sprawling cast, Obreht also has a poetic touch for writing intricate and precise character descriptions.”

“Obreht is the kind of writer who can forever change the way you think about a thing, just through her powers of description.”
—Elizabeth McCracken, O: The Oprah Magazine

"In a moment where the book world fetishizes self-examination and minute, sentence-level showiness, it is not only a relief but a privilege to see Obreht shoot the moon with this sprawlingly ambitious and fully imagined tale."
—Sally Franson, San Francisco Chronicle

"Eight years after Obreht’s sensational debut, The Tiger’s Wife (2011), she returns with a novel saturated in enough realism and magic to make the ghost of Gabriel García Márquez grin...The final, luminous chapter is six pages that will take your breath away."

In the lawless, drought-ridden lands of the Arizona Territory in 1893, two extraordinary lives collide. Nora is an unflinching frontierswoman awaiting the return of the men in her life—her husband, a newspaperman who has gone in search of water for the parched household, and her elder sons who have vanished after an explosive argument. Nora is biding her time with her youngest son, who is convinced that a mysterious beast is stalking the land around their home, and her husband’s seventeen-year-old cousin, who communes with spirits.

Lurie is a former outlaw and a man haunted by ghosts. He sees lost souls who want something from him, and finds reprieve from their longing in an unexpected relationship that inspires a momentous expedition across the West. The way in which Nora’s and Lurie’s stories intertwine is the surprise and suspense of this brilliant novel.

Mythical, lyrical, and sweeping in scope, Inland is grounded in true but little-known history. It showcases all of Téa Obreht’s talents as a writer, as she subverts and reimagines the myths of the American West, making them entirely—and unforgettably—her own.